Grand Traverse main fishing lakes are Long Lake for walleyes and smallmouth bass. Duck and Green Lake for bass and pike., with lots of smelt being caught on Green Lake in the winter. Leelanau County main lakes are Lake Leelanau for walleye and smallmouth bass, Big Glen and Small Glen for perch and trout. One of the Greatest king salmon fisheries is off the North Manitou “crib” in July and August. Leelanau County also has the Sleeping Bear National Park which is a must see if you are in the area. Grand Traverse County has the two bays East and West which are boaters paradise, with the meeting place at Power Island on West Bay. Also a Great lake trout fishery in May and June, with the salmon showing up in late July and August.

Has a full line of Bait and tackle

Has a full line of minnows and tackle

Has a full line of bait and tackle

They have crawlers and worms in the summer, they will handle minnows in the winter

Handles crawlers and worms, has full line of tackle 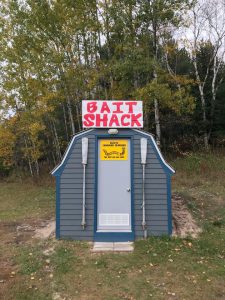 Photo of nice lake trout out of Leland caught on a charter with Capt Jack Duffy.
There has been quite a few people out on the inland lakes trying there luck, but many are stating to fish for salmon as they start up the coast in August and reports have been good with some big kings being caught.
Most inland lakes have been fair for fishing but you have to go to the deeper water in the lakes.
Houghton Lake: Walleye and bass were caught in 12-15 feet of water in East Bay. Anglers were mostly using crawler harnesses and leeches.
Higgins lake rock bass, lake trout, perch and smallmouth bass.
Cheboygan River: Freshwater drum was the catch of the week for most anglers with some catching in the double digits. Channel catfish and smallmouth bass fishing was picking up with many exceeding possession lengths. Natural bait continues to be the dominant choice when fishing along the river.
Little Bay de Noc: Walleye anglers that launched out of north shore managed to catch a few fish while trolling. Similar experience for those that launched out of the Whitefish River, although most were undersized. Smallmouth bass anglers were having some success. Some anglers fishing off the Gladstone fishing pier were catching perch and pike.
Big Bay de Noc: Smallmouth bass anglers were doing well. Reports of fair to good numbers being caught, along with some respectable sized fish in the mix. Perch anglers had variable success, with some able to catch their limit. Salmon fishing in Fairport seemed slow in comparison to previous weeks, although anglers were still making some contact with fish. Most are targeting depths between 100 to 150 feet of water. … See MoreSee Less

The weather in Northern Michigan is going to be great this weekend and the fishing should be good with all the rain as it has washed feed into the lakes getting them to start feeding.

The gills seem to be in the deeper water now with crickets and waxworms working best.

Houghton Lake: Walleye, pike and bass were caught on the south shore while using a purple Beetle Spin. Crawlers and minnows were also doing well.

Grand Traverse – East Bay: Lake trout fishing was good out of Yuba launch. Fishing in 80 to 120 feet of water was best. Smallmouth bass fishing slowed down but a few were being

Grand Traverse – West Bay: A few bass were caught in Bowers Harbor near the drop-offs and around any structure. Few bass are left on beds. Lake trout fishing was picking up around Marion Island. A few salmon were caught but the big numbers of salmon were not there yet.

white Lake by whitehall has been good for gills with waxworms working best.

Hamlin Lake has been fair for panfish, pike and a few walleye.

Little Bay de Noc: Perch anglers were experiencing mixed results. Those that found schools had to work for bites and plucked away to catch fish of a reasonable size.

Big Bay de Noc: Smallmouth anglers were reporting good catch rates. Fishing around the islands showed signs of improvement. Anglers launching out of Nahma were landing multiple large fish. Perch anglers in Ogontz struggled, but some managed to bring in small numbers. Salmon fishing in Fairport was excellent, with some reports of success with steelhead; many targeting 100 to 180 feet of water.caught. Only a few bass were still on beds, most have moved to the edge of the drop-offs. Most bass were caught next to structure near the drop-off. A few salmon and steelhead were caught.

The Ontonagon River was producing a few legal walleye for folks who were trolling and jigging but there was a lot of sorting to be done for the legals. … See MoreSee Less

Fishing has been slow as the lakes were a party over the weekend and now we have room to fish again. The weather is looks great this weekend in Northern Michigan.

Houghton Lake has been fair for walleye and gills with leeches working best.

Otsego lake has been good for walleye with crawlers and leeches working best.

East Grand Traverse bay has been good for smallmouth and some ciscoes.

Bluegills are still biting on many lakes in the deeper lakes on worms and crawlers.

Little Bay de Noc: Anglers fishing for walleye have had little to no success. Reports of mostly undersized fish being caught. Perch anglers were finding some action when using worms in shallow waters. Shore anglers along the Ford River were catching smallmouth bass.

Big Bay de Noc: Smallmouth fishing has experienced an uptick. Anglers report fair to good success when launching out of Nahma or Ogontz. Perch anglers were able to land some small numbers in Ogontz Bay. Salmon fishing in Fairport has been good.

Walleye were caught scattered throughout the eastern part of the bay. Anglers caught walleye out from Quanicassee in 10 to 12 feet of water. The slot is producing walleye in 16 to 18 feet from Sunset to Sebwaing and up towards the islands. Anglers going over the bar are finding some walleye in 20 to 25 feet of water. Walleye were also caught at Sand Point. Crawler harnesses, flicker shads and spoons all caught walleye this week. … See MoreSee Less

We have had lots of wind and cold weather this week and not many venturing out. What few have went out have had success this week.

Lake Charlevoix-Pressure was lighter last week in the channel with fewer cisco being caught. Anglers still caught a few, along with increasing numbers of smallmouth bass. Mainly small bass, but a couple were keeper size. Not many are targeting smallmouth yet, they were usually caught by people who were casting/jigging for cisco. Worms work well for smallmouth (real or artificial) fished near the bottom.

Little Bay de Noc: Smallmouth anglers are catching fish at the mouth and in the Ford River. Walleye anglers are having a tough time but some reports of success. Limited numbers being caught around Portage Point and out of the Whitefish River when trolling or drifting crawler harnesses. Perch anglers that went out of Kipling and Gladstone had some success. Shore anglers at the Whitefish caught perch. People that fished the dock and shoreline at Gladstone caught perch and rock bass.

Big Bay de Noc: Smallmouth fishing has been good. Catch rates have been mixed throughout the bay. Those that headed out of Nahma and Ogontz found most fish out deep near structure, although some were also caught in the shallows along the shore. In Fairport, some Chinook salmon are being caught.

Houghton Lake has been so windy it has been hard getting out, but some gills, bass, and walleye.

Higgins Lake- Some lake trout trolling in the deeper water, rock bass on the drop-off. Smallmouth are coming in the shallow water pre spawn.

Cadillac and Mitchell have been fair for walleye, crappie, and bass.

Hamlin Lake has been fair for gills and crappie. Some pike and bass.

Otsego Lake has been fair for walleye with leeches working best.

Traverse City- Ciscoes are biting on east grand Traverse Bay and great smallmouth fishing as they are in pre spawn.

Saginaw Bay: Walleye Anglers are trolling with crawlers in 12 to 15 feet of water in front of the Bay City State Park. Walleye are also being caught in the old Dumping Grounds in 20 feet and at Sail Boat Bouy’s A-B in 17 feet of water. At the end of Linwood Road some boat anglers are catching blue gill in 6 feet of water. Crawlers seem to be working better than crankbaits. … See MoreSee Less

This is a good time to introduce a family member or friend to the sport of fishing.

Bob Hensel had a good night fishing 🎣 the big one is 10 1/8" the Bass were hungry too they kept striking his bobber.

Many are reporting good blue gill fishing as gills are in the the shallow water also bass.

Higgins Lake: Anglers are trying for lake trout in 80 feet and deeper. The key is to find a school of fish and stay put while fishing just off the bottom. Perch are being caught around the islands however anglers are sorting through a lot of small ones to get a few keepers. Smallmouth action picked up and anglers continue to catch lots of rock bass.

Houghton Lake: Bass were most active in the morning and late afternoon. Crappie could be found along the edge of the weed beds in 8 to 12 feet. Walleye were caught near the drops along the weed beds in 10 to 14 feet when using a crawler harness or crankbaits. Hot colors were green, orange, or blue and silver. Those bowfishing for carp have done very well in the shallows.

Traverse City: Water temperatures have been all over the place in both bays due to the wind and very warm weather. Temperatures range from 50 degrees to 65 degrees up near shore. In the East Bay, bass fishing was slow but should pick up. Cisco fishing has picked up and some are getting limit catches. Some have done well in shallow water while others found fish in 30 to 60 feet. In the West Bay, anglers were getting a good number of Cisco in shallow water around Lee Point, Marion Island and off the tip of Mission Peninsula. Bass fishing was slow. … See MoreSee Less